What You Need to Know About Aortic Surgery An aneurysm is the permanent enlargement or ballooning of the vessels. An aneurysm most often develops in the aorta, the body’s largest artery. The aneurysm expands over time and will burst if left untreated, often causing death. Often, aneurysms do not cause a complaint and are noticed incidentally in examinations performed for other reasons. When an aneurysm is diagnosed early, permanent treatment is possible. The classical treatment of an aneurysm is to replace the enlarged vessel part with an artificial vessel. Another treatment method that can cause less discomfort is to enter the vein with special catheters and place the artificial vein inside the aneurysm part of the vein.

Learn more:
Aneurysm is the permanent enlargement or ballooning of the vessels. Aneurysm most often develops in the aorta, the body’s largest artery. The aneurysm expands over time and will burst if left untreated, often causing death. Death from aneurysm ranks 13th among the causes of death in society Some people are at risk for an aneurysm. These include;

The risk of aneurysm increases with age. Aneurysms are also more common in men.

The cause of aneurysm is not fully understood. However, destruction of the proteins called collagen and elastin which allow the vascular wall to withstand blood pressure, is one of the most prominent features of aneurysm. In other words, in the aneurysm, there is a kind of weakening of the vascular wall and then the expansion of the pressure inside it. This event is often associated with atherosclerosis, ie hardening of the arteries.

Indications:
Most of the time, aneurysms do not cause a complaint. People can sometimes notice a mass in the middle of the abdomen that swells and descends with every heartbeat (pulse). Low back pain, abdominal pain or back pain due to aneurysm are attributed to old age. 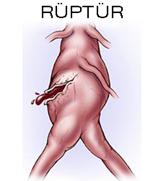 However, abdominal, back and low back pain that has been continuing for the last few days and especially with hypertension should suggest an aneurysm. Furthermore, the complaints in a rupture, which means a bursting aneurysm are completely different.

A rupture causes sudden internal bleeding, often leading to death. In case of sudden severe back and abdominal pain, fainting, high or low blood pressure in a person who is known or not for an aneurism, rupture should be considered and the person must be admitted to hospital immediately.

Diagnosis:
When an aneurysm is diagnosed early, permanent treatment is possible. However, since aneurysms generally do not cause many complaints, they are often detected incidentally during examinations. A significant number of aneurysms can be determined by a doctor’s examination. However, the simplest method in the diagnosis of an aneurysm is ultrasonography. Ultrasonography is a simple, fast, inexpensive and reliable method in the diagnosis of aneurysms. Ultrasonography is also a very good screening tool for aneurysms in the community. All men over the age of 65 should be evaluated for aneurysm by ultrasonography at least once in their lifetimes. Other methods are used in the diagnosis of aneurysm, especially to plan the treatment. These are computed tomography, magnetic resonance imaging and angiography.

These methods determine the size of the aneurysm (it is the most important element of treatment planning), where it is and with which organs it is associated. Angiography is generally not required for surgical intervention, but it is appropriate to have it performed when planning endovascular aneurysm repair. 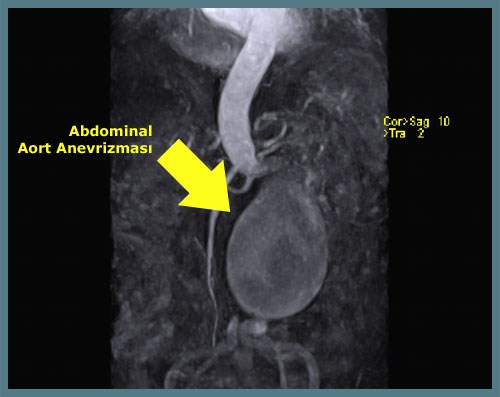 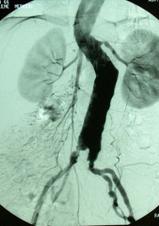 The classical surgical treatment of aneurysm is to replace the enlarged vessel part with an artificial vessel. This method has been used for about 50 years and provides reliable and permanent results. The surgery is performed under general anesthesia by making a large incision in the abdomen, and if there is no problem, the patients are discharged within 7-10 days after surgery. It may take 1-2 months for patients to return to their normal lives. This method is a method that can completely treat aneurysm. However, as it is major surgery, the mortality risk is 5% on average. 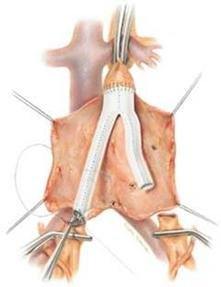 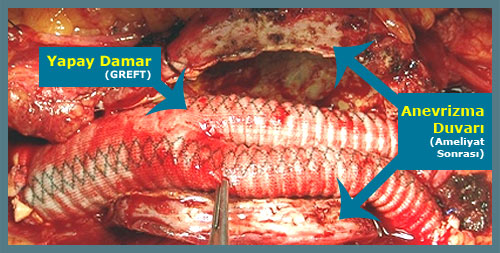 Another treatment method that may cause less discomfort is to enter the vein with some special catheters and place the artificial vein inside the aneurysm part of the vein. This method, known as endovascular (intravenous) aneurysm repair, has a history of about 10 years. No incision is made in the abdomen with this method, the procedure is performed under x-ray through small incisions made only in the groin.

The artificial vein inserted into the aneurysm is inflated and the vein is attached with special hooks from the inside instead of stitches. Patients are hospitalized for a day or two after the procedure and discharged. This method is only suitable for some aneurysm patients. After the artificial vein is placed in the aneurysm, the aneurysm can continue to grow and even rupture. Therefore, patients should be followed up by computed tomography or color Doppler ultrasonography intermittently after the procedure. In this respect, this method does not always treat aneurysm permanently, unlike the open surgery method.

The aortic wall has 3 main layers. The rupture of the inner layer of the aorta and the passage of blood to the middle layer and forming a new lumen here is called aortic dissection. It is usually encountered in older people. A newly formed aortic dissection is an emergency and life-threatening condition. There is a possibility that the outer layer of the aorta can rupture and burst. 50% of patients die within the first 48 hours. With each subsequent hour, the risk of death increases by 1%. 58% of patients are lost with medical treatment. Chances of survival are reduced if the aorta bursts. 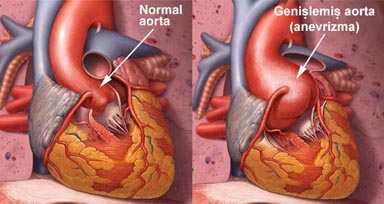 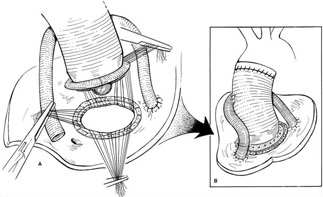 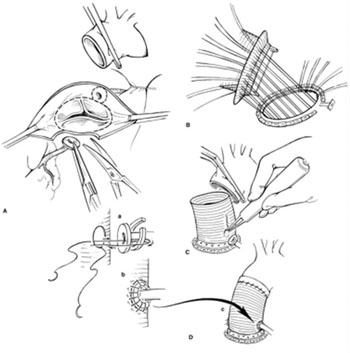 Aortic dissection types according to their location)
Preoperative and postoperative aortic images of a patient with a descending aortic aneurysm operated in our clinic. The patient’s body temperature was cooled to 19 ° C by using a heart lung machine and circulation was completely stopped for 30 minutes for this surgery Repair of aortic dissection with an artificial vein. In such surgeries, the patient’s body temperature is cooled down to 19 ° C by using a heart-lung machine and the circulation can be stopped completely until the operation is finalized.

Write Us, We Will Answer